Prior to the end of the roaring 20s Montana fly fishing was mostly done with wet flies of one kind or another, with the possible exception of Jack Boehme's Bunyan Bug like adult salmon flies. How many dry flies did William Beaty in Butte actually sell? I don't think anyone really knows. The Adams is generally attributed to Michigan fly tier Leonard Halladay in 1922. How long did it take for the Adams to migrate West? That too is not an easily answered question. It is clear most early Montana fly fishing was all about wet flies.

That began to change by the end of the decade because of innovative influences from Idaho and Upstate New York. Taylor Beartrack Williams from the Sun Valley area gave us the Renegade in 1928 or so, perhaps originally for fishing Idaho's Malad River. And perhaps as early as 1929 Lee Wulff started tying his game changing dry flies. It didn't take long for the popularity of Lee Wulff's great flies to migrate West.

The quick popularity of Wulff style dry flies out West has a lot to do with the emergence of Dan Bailey a few years later. We'll get there soon.

The Renegade doesn't sell as well as it used to but nearly all Montana fly shops do still stock them. My now departed buddy Tom Morgan told me he liked to fish Renegades in size 18 and 20 during Trico time. Tom referred to the Renegade as "One of his favorite flies." Tom also complained finding Renegades in small sizes was difficult. I 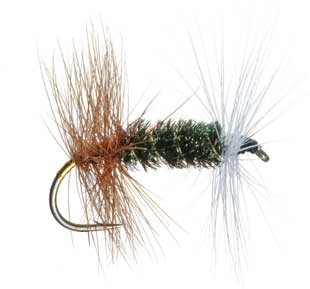 change this image
I wish Tom was still here. Three or four times a month I think of something I'd like to ask him and now he's gone. Tom got flies from everybody. He gave most of them away. The flies Tom actually fished with--not counting steelhead flies--almost all came from Al Troth. Tom told me that more than once. What I'd like to ask him now is what he thinks about the idea of a black and white Renegade instead of the traditional brown and white. At least at Trico time, which is when Tom used them most. Tom was an inventor at heart. There was nothing Tom liked to talk about more than hypothetical, speculative new ideas. About almost anything. I think that's one of the reasons we became such special friends. I

Many younger fly tiers only know the Bunyan Bug because of Norman McClean's A River Runs Through It. And because of the movie. When I first started fly fishing as a twelve year old in Montana you could still buy Bunyan Bugs. I never did. Not until I became a middle-aged fly collector anyway. And then later still when I actually tried fishing them and was surprised to find out how good they still were. 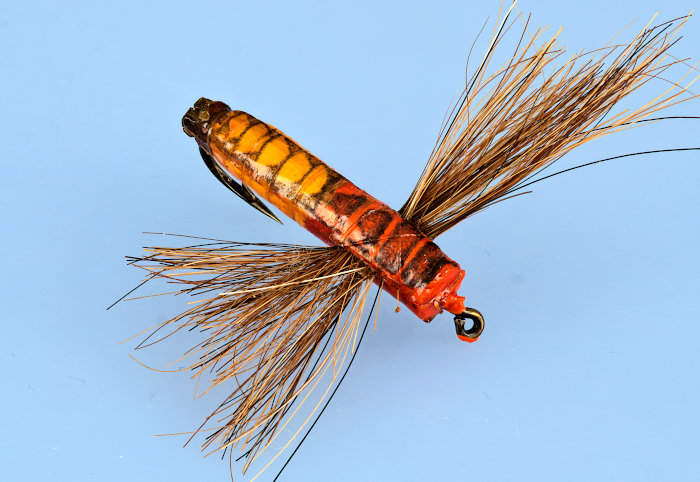 Bunyan-bug.jpg
When they filmed the movie I was an older than traditional age (41) computer science student at Montana State. I worked my way through school doing river, spring creek and Yellowstone Park trips for George Anderson's Yellowstone Angler. Back in those days Buck Anderson of the CA Ranch still let outfitters come to fish Sixteen Mile Creek two days a week. I was up on the creek a lot when they filmed the movie (the movie was filmed in multiple locations but the CA Ranch got most of the action).

On one day I was fishing up above the high railroad trestle working with three Frenchmen who either couldn't speak English or refused to anyway. It was a struggle. I did everything with sign language. They were good fishermen too, which made me worry about a tip.

Actors, film crews, bright lights, aluminum scaffolding and Model T Fords were all working hard overhead on a high railroad trestle as we fished down below. I became vaguely aware of someone yelling and waving. I assumed someone was trying to bad vibe us off the movie set so I pretended not to notice. But the yelling became even louder. I looked up. It was Robert Redford waving his arms and hollering "How's the fishing?" I waved back and hollered: "yyyyYYYYYYEEEEEHHHhhhaaa!"

The movie set was a blast. They had to shut the whole operation down at one point when their crew of two or three octogenarian Butteician Model T Ford mechanics left for a three day old fashioned car show in Idaho Falls. A day or two later I got a trip from one of the Bozeman fly shops. They wanted me to take a film maker on a Madison River boat trip in order to get closeup salmon fly action video.

The head of the hatch had been at Ennis the day before so we decided to drift from Varney Bridge down to the Eight Mile access. No fishing rods. This was all about bugs and a huge 16mm film camera. The film maker was a totally cool guy--Peter Pilafian from Jackson Hole who was the mountain climber who filmed all the cliff wall Eiger Sanction action scenes. He was really good at what he did. The first half of the trip was pretty uneventful. We didn't really get into the big bugs until a mile or two above the takeout. We parked and went to work. It was fun to watch. And now too the point of this little story. What we see and what we notice is more influenced by what we're doing than we realize. When I'm guiding fishermen my eyes do double and sometimes triple duty. I keep one eye downstream so I don't make any big log jam mistakes with the boat while the other eye scans for likely places to fish, while somehow keeping another eagle eye on my customer's line and fly. Beyond that it's hard to notice much more.

Peter didn't come to fish. I don't remember a trip where I saw so many bugs crawling flying mating and hanging from the willow bushes like bunches of grapes. Ed Curnow drifted by and waved. He said they'd caught over 100 fish. That meant the fishing was good. Ed was a cool guy and a very good guide. Ed helped me a lot when I was first getting started. He was a generous man but a little wacky at times too. When ever Ed reported fewer than 70 or 80 fish you knew you were in for a tough day. Because I wasn't fishing that day--or rowing once the filming started--I noticed more about Salmon Fly behavior than I ever had. The big bugs are out of their element in the water. Imitations like the Sofa Pillow, Bottle Brush or Bird's Stonefly might drift for 50 to 100 feet or more as you troll them off the side of a boat. But real ones seldom go more than 20' feet before they get gobbled. Once they are in the water it's hopeless. They cannot fly again and they will drown or get eaten. Or both. And their wings are often if not usually spread-eagled sideways out, like Bunyan Bug wings. The real ones struggle a lot too.

During Salmon Fly time I almost always fish an orange and gray foam adult as a bobber with a big 2" inch long Marshmallow nymph trailing 2 to 3 feet behind, attached to the bend of the big foam adult's hook. The nymph catches ten times as many fish, but that way you get to fish a nymph while still watching a dry fly. Tying typical contemporary foam adult Salmon Flies with a pure white Widow's Web crossbar for wings--like the Bunyan Bug--makes them easier to see too. And they work just as well too.

Lee Wulff dropped out of engineering school at Stanford in order to become an artist and fly fisherman in something like 1927. What a cool guy. Lee travelled to New York City to pursue a career as an advertising artist. He also liked to fish. He became friends with a Brooklyn based physicist named Dan Bailey. Lee started tying his infamous (they were not in any way traditional) dry flies early in the 1930s. If not earlier. I was surprised and pleased to read Lee at first tied his hair winged dry flies with one upright wing only rather split. I tie all my dry flies with one wing rather than split. It turns out it was Dan Bailey who eventually turned the steering wheel of history towards their now more familiar split wing incarnation. 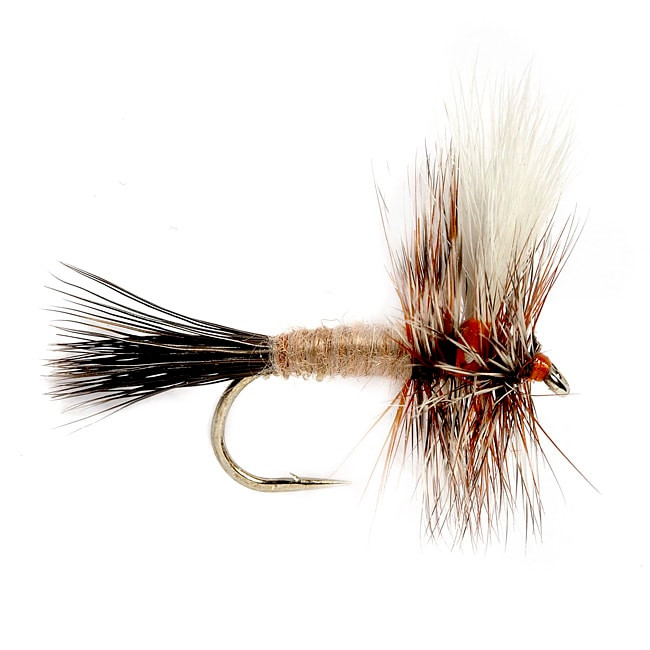 change image
I was surprised to read too that the most famous Wulff fly of all--the Royal Wulff--may not even have been entirely Lee Wulff's pattern. Some sources cite Q. L. Quackenbush, an early member of the Beaverkill Trout Club, as the Royal Wulff's earliest creator. I

What an accomplishment. Flies designed and first tied in the late 1920s or early 1930s are still among today's best selling flies--certainly so in Montana but probably just about everywhere at this point. Lee Wulff worked with Dan Bailey of Livingston, MT in the 1930s. It was Dan Bailey who talked Lee into renaming the Ausable Gray, Coffin May, and Bucktail Coachman to the Grey Wulff, White Wulff, and Royal Wulff. The Blonde Wulff, Brown Wulff, and Black Wulff were three other fly patterns developed in those days. Notes:

I http://english-fly-fishing-flies.s3-website-eu-west-1.amazonaws.com/dry-renegade.html One online source claims I : "The Renegade is a fly pattern developed by John Hagen – a fly fisherman, guide and fly tier who lives in Colorado." Somehow who still lives? I doubt that. Flyfishing the Sierra says I : "devised on the Malad River by guide Taylor "Beartrack" Williams in 1928. The Flyfishing the Sierra account rings the most credible for me, although I can't hononestly say why. The Renegade was not only one of Tom Morgan's favorite flies it was a favorite of Earnest Hemingway too. I (In 1933 Lee and Helen made a trip to the Margaree River in Nova Scotia where he landed his first fly caught Atlantic salmon on a bi-visible dry fly.)