In his 2003 book How Fish Work fisheries biologist Thomas Sholseth, in a chapter about the importance of light in understanding fish behavior, seems to be suggesting outline recognition is a mechanism piscivorous predators use as a counter measure to the evolving and ever more sophisticated camouflage exhibited by their aquatic prey. That's a bit of a mouthful. Sholseth's chapter is a bit hard to follow but I do think that's the gist of it.

In other words prey species like Sculpins have evolved mottled stream bottom colorings because it works. Camouflage disguises their presence. Camouflage confuses the predator's color pattern recognition mechanisms. So in an evolutionary tit for tat response predators have evolved auxiliary outline recognition capacities that may involve 'outline enhancement,' perhaps even utilizing polarized light. I The low level cellular details of these mechanisms may be beyond the scope of a fisherman's interests. The important part is they exist. The important part is that outline recognition is an evolutionary adaption predators use to counteract color pattern camouflage.

This back and forth evolutionary appearance warfare is well documented. In his ground breaking 1940s work on camouflage and adaptive colouration Hugh Cott (Cott is British so I'm using his colouration spelling) among other things points out many predators--including predatory fish--have evolved an "amodal reconstruction capacity" that allows them to visually fill in prey outline contours otherwise obscured by coloration camouflage.

Thomas Sholseth strongly infers high contrast flies and lures are the best way for fishermen to leverage predator outline recognition. This not only begins to make sense, it intuitively suggests rather obvious arguments explaining why unnaturally high contrast flies like the Prince Nymph the Zebra Midge and various high contrast minnows were heretofore so inexplicably effective. Contrast has moxey. 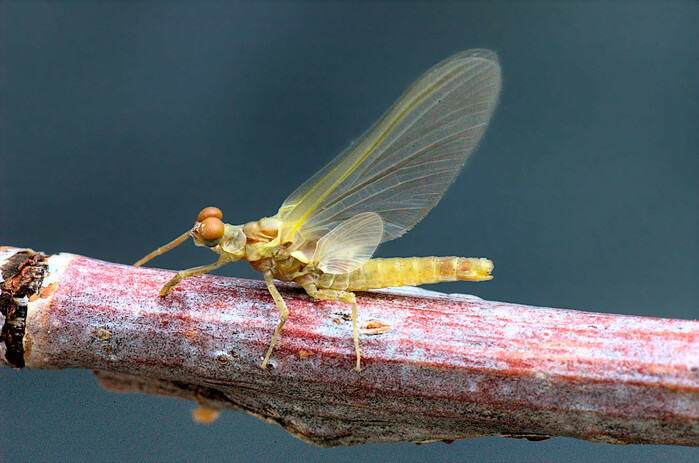 Pmd males are smaller than the females, more yellow than olive and they are hyper-active. They seldom drift more than 12" inches before they fly off the water's surface. This one has no tail fibers. This turns out to be fairly common. Do they sometimes break off during the eclosion process?
Female Pale Morning Dun 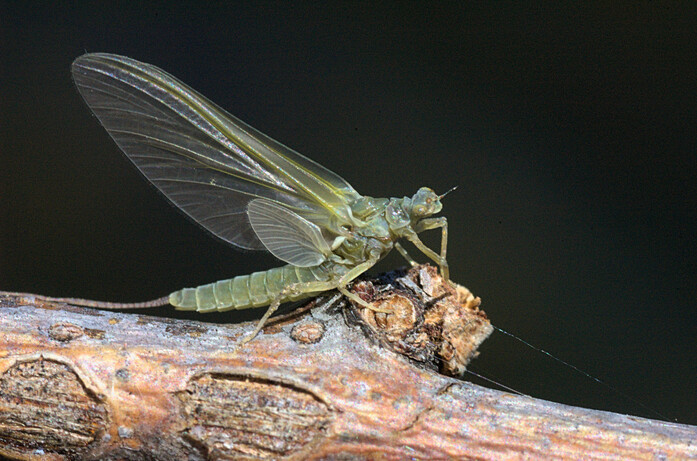 The females are larger and far more lethargic than the males, often drifting 20' feet or more before flying off to the willow bushes where they perch quietly for the balance of the day--at least until mating time.


I buy that argument. To some degree anyway. Mayfly imitations in an active ongoing hatch do work better if they are not too big and if they do have vaguely the right overall size and coloring. Most PMD fishermen use small yellow dry flies or emergers. Yellow is interesting because only the male PMDs are yellow and they do leave the habitat almost the instant they hit the surface. I After that they're away from the water for the rest of the day. Male PMDs are highly active and they do fly over the water all day long so they're the ones you see. But once airborne they are never in the water again. Not until after mating time anyway. The slightly larger olive colored females are the ones that ride the surface for 20' feet or more. You never see the females after they fly. They go straight to the willow bushes and perch there motionlessly until mating time arrives. Nobody fishes olive PMDs and yet they're the ones the fish are gobbling off the surface.

I couldn't help noticing too, during many PMD hatches, if you ran out of PMD patterns in the middle of a hatch you could switch to smaller grayer Blue Winged Olive imitations and never miss a beat. Matching the hatch is important to some degree. But only during a hatch and too big seems to matter a lot more than too small. Royal Wulffs do not work well at all. That is true. But a large variety of shapes colorings and sizes ranging from a bit too big to a bit too small do work. They work well too. It's also worth pointing out small not-weighted soft hackle wet flies can be absolutely deadly during a PMD hatch. As a guide I can't remember a single customer who came wanting or expecting to fish with soft hackle wet flies during a PMD hatch. But I often put them on when it seemed time to change flies. Soft hackle wet flies are a goto fly for me during a hatch, especially so during Fall Baetis.

Perhaps I haven't really said much yet. Outline recognition is primarily important outside the active ongoing hatch context. That sounds a lot like the "Match the hatch during a hatch. Use an attractor after the hatch is over" adage.

I am suggesting Matching the Hatch is somewhat important during a hatch, but perhaps less so then many would have us believe. More important, for any outside the hatch context the best attractors aren't necessarily the ones with the brightest flashiest colors. The best attractors are the flies that create the most contrast with their backgrounds. That's why jet black leeches, black Woolly Buggers and black streamers of all kinds are so effective. The blackest blacks absorb all the available colors and appear as an outline against a chaotic stream-bed background no matter what. White or homogeneously chartreuse streamers do much the same. I often find Blacks and Whites to be more effective than multi-colored bright flashy streamers. Almost always in fact.
Black streamers are red hot 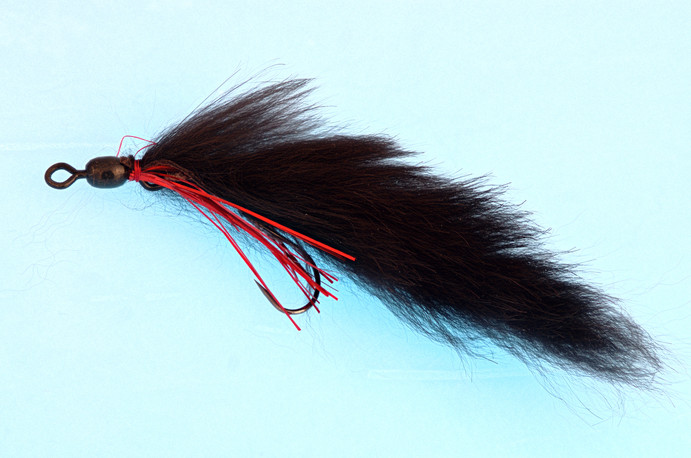 This one is a snellie--a convenient way to place a relatively small hook where it needs to be--on any relatively large fly. I need to start painting black and white eyes on those black swivels up front.
Bright bright colors often work well in the early season when water levels are high and the currents are a bit off color. But I also find the brightest flies are equally counterproductive late in the season when water levels are low and clear. Dull tan or brown nymphs seem to work better in low clear water conditions. High contrast blacks and whites do too. High contrast blacks and whites work well all year long. Early and late, in high off color waters and in late season low clear waters.

How many times has the Prince Nymph saved the day for you? Other than the Prince Nymph's outline it's coloration details don't look like anything real. It is a high contrast fly. So is the semi-magic Zebra Midge. So too are the wide tinsel bands on a traditional British style Gold Ribbed Hare's Ear.

Are Match the Hatch enthusiasts who substitute thin wire ribbing for the more traditional wide-banded tinsel ribbing on a British-style Gold Ribbed Hare's Ear damaging the effectiveness of their lures? Are they making their flies harder for fish to see? I think so. So does Thomas Sholseth.

Do terms like Matching the Hatch sometimes infer a little more than they should? What about Matching the Behavior?--which is both a looser term and another way of saying "Go with what works and don't worry so much about why."

Flies like Don Martinez' Black Nymph have fallen out of fashion because they're a round peg in the square holes created by Matching the Hatch ideology. But the Martinez Black Nymph is a powerful fly--a fly that fits right into the rounder holes of high contrast outline recognition. I need to tie some more Black Nymphs. Now. Pat Barnes liked that fly a lot. Who's to argue with that?
The Martinez Black Nymph 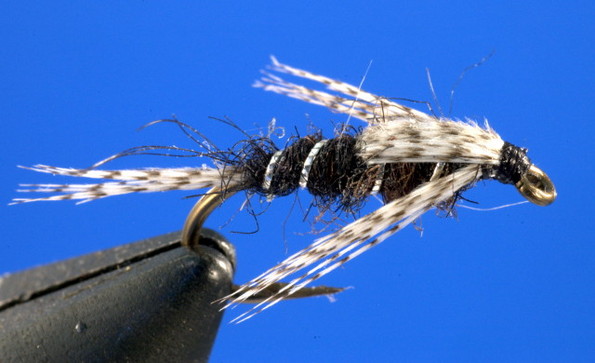 I Polarized light is ubiquitous in aquatic environments. Light gets instantly and thoroughly polarized by the mirror-like surface of the water. It makes sense to think aquatic creatures would evolve to make use of it. It makes no sense at all think they wouldn't.

I The idea that peacock herl has special fish catching powers has been around for a long time. Sholseth says peacock herl "reflects polarized light like crazy." He also mentions polarized UV light a few times, but does not sufficiently elaborate. All light in aquatic contexts--at least in the first few feet below the surface--is highly polarized, by its interaction with the water's surface.
Next Page Prev Page