One of my old Computer Science instructors at Montana State--Ray Babcock--called me instead of sending email. Ray said some guy who lived in a wheel chair needed help with voice recognition software. Ray said the wheel chair guy had something to do with fly fishing and he thought I might be better suited to helping him. "Have you ever heard of a guy named Tom Morgan?" Ray asked me.

I went out to Tom and Gerri's place a few days later. It turns out I had actually met Tom once before, at a wedding out in Gallatin Gateway. Tom was already in a wheel chair then. I remember asking myself "Would I want to live like that?" Tom had multiple sclerosis so badly he couldn't move his hands. He could talk and eat. And tell jokes. And think. He continued to live a good life mostly because of Gerri. And because he had a rich life including a thriving business with three or four loyal employees. Tom's business still lives on today as Tom Morgan Rodsmith's thanks to Joel Doub and Matt Barber who bought Tom's business a few months before Tom suddenly, unexpectedly passed away.

Tom and I became friends almost right away. Tom was an inventor at heart and so was I, although I was a boat builder, fly tier photographer and computer programmer. And what Tom really needed was an electrical engineer. Tom had ancient voice recognition software installed on an aging Windows XP computer. He could surf the internet and he could even make telephone calls, but he needed a human hand to come into his room to flip a switch so he could switch from Firefox (his browser of choice) to the phone. And versa visa.

We spent countless hours working on it. I tried to get a friend who was a masters degree student in EE to design and build a gizmo. Tom said no. "That guy will move to California and I'll be shit out of luck if it ever stops working!" Tom was right. I wish I could say I figured it out but it was Tom who found the solution, after many more countless hours on the phone with software and digital gadget people in California. After that Tom said he hated to see me go. "Would you like to take a look at our website?" he asked.

The website was a mess. I was more of a backend unix/linux server guy but I figured it out. I never charged Tom a cent the whole time. Not for almost a decade. That was one of my smarter moves. Tom was a cool guy but he was a bit of a compulsive haggler when it came to prices, about almost anything. Because I never charged him Tom felt a bit guilty. He gave me rods instead of money. I have quite a few. Gerri became a good friend too. Gerri still is a good friend.

I asked Tom once how he could remain so cheerful and optimistic given his situation and prognosis. Tom said "I tried feeling sorry for myself Sandy. It just made things worse." Then he grinned like a Cheshire Cat. From ear to ear. It turns out Tom wasn't just a rod designer. He imagined designed and had machine tools built for his business. There was a complex high speed router he designed in his head and had built that included an adjustable tapered in-feed mechanism, for accurately roughing out bamboo strips prior to more accurate hand planing.

He had a draftsman friend in Alberta who helped with the blueprints. Tom imagined designed and manufactured his now famous and widely used bamboo Hand Mill too, which is a hand plane with micrometer adjustments and carbide cutters for tapering bamboo strips down to dimensions measured by thousandths of an inch. Tom was also a fly tier. For a while anyway.
Bill Blackburn setting up a Morgan Hand Mill. Bill used to be Tom's main bamboo rod guy. Bill has his own business now, at Blackburn Bamboo Rods 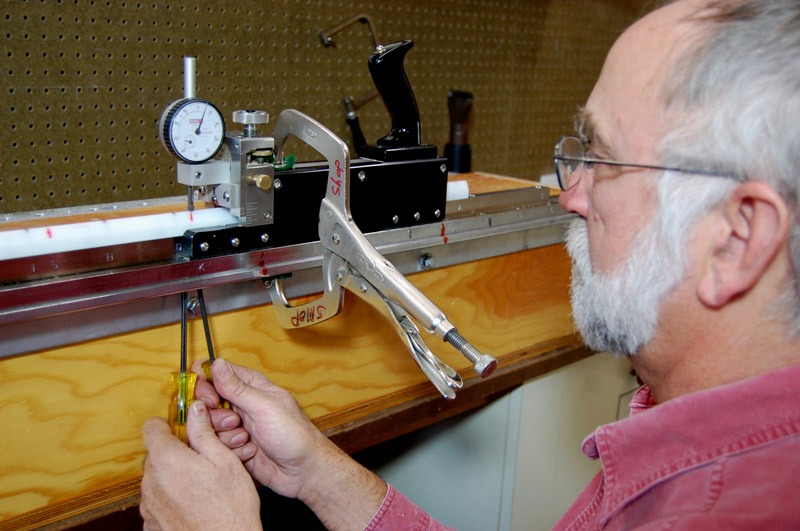 Tom designed this gadget in his head, at a time when he couldn't move his hands anymore. Tom could work with software using voice commands. He became very good at it.


Tom told me he eventually gave up fly tying because it was too hard to achieve perfection--which was always a goal for him--and all he really wanted to was to design and build rods anyway. Tom showed me about a dozen Thunder Creek Minnows he had tied. Most of them looked like experimental flies but a few of them were remarkably handsome flies. "When I fished I always chose the most beautiful fly in my box," Tom said. "So by the time I quit fishing all I had left of my own were ugly flies."

Tom made me promise never to publish photos of any of his ugly flies. Only the few shown here at the Gallery link (look at the bottom of the TOC table of contents, as screen to left) would be allowed. Tom said he solved his frustrating tying problem by buying flies from Al Troth. When Al got sick and eventually hospitalized with Parkinson's disease Tom and Gerri went to visit Al in the hospital, which wasn't easily done because of Tom's wheel chair limitations. Tom was a cool guy. I miss him dearly. Notes:

Tom Morgan grew up in Ennis Mt. Tom spent most of his early life guiding fly fishermen, until he eventually bought the Winston Rod Company from Doug Merrick in San Francisco, in 1973. Tom moved the Winston operation to Twin Bridges, where it still is today. After Tom sold Winston to its current owners he started another small rod-making company called Tom Morgan Rodsmiths. Tom developed multiple sclerosis in the early 1990s but still continued to produce rods until his death a few years ago, at the age of 76. Winston Rod Company History